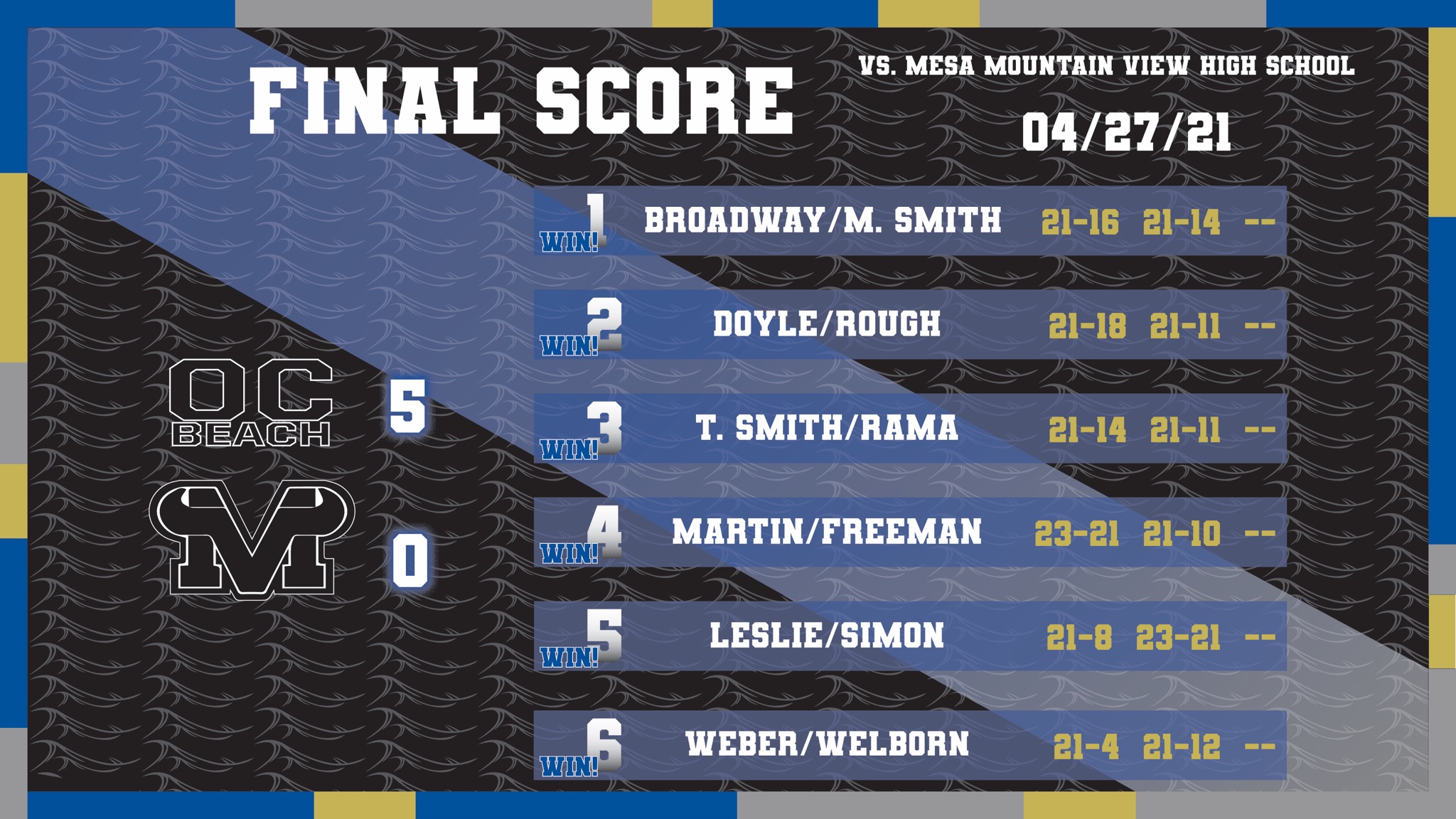 Senior Day is a mixture of emotions because of their path to new chapter is waiting and having to say goodbye to the seniors on their last home match of the regular season vs Mountain View Mesa. The memories these seniors have made for this program will always be remembered. Today we recognized five seniors who all have been part of the OC Beach program all four years.

The day started out with our seniors, Presley Simon going to GCU and Shayla Leslie going to University of Arizona. Simon/Leslie had a strong start in first set 21-8 win. Second set was a bit different by playing point for point and having great plays to finish their match point 23-21 win. Both Simon and Leslie has been a key role on this team to set the team culture for this program. Their selfless leadership has not be unnoticed and helped others be better teammates. They both have had successful season with only 1 match loss.

In the 4”s seed, our seniors Sarah Martin, CSUB Indoor and Beach commit and Trinity Freeman, ORU Indoor commit had a very close point for point first set win 23-21. Followed by a dominate second set 21-10 win, Martin and Freeman gave OC Beach 2-0 lead. Martin and Freeman will continue their volleyball career at their respected schools and look forward to cheer them on playing at the next level in college. Martin’s leadership has contributed to the team in positive atmosphere while Freeman’s leadership has contributed the team’s fun spirit and work ethic. Martin/Freeman has really set the tone for the team expectation and accountability.

At our #3 seed of Freshmen Piper Rama and Tristin Smith had control in both set wins of 21-14, 21-11. The duo has played together several times this season and improves their record 10-1 individually and will be key role for state playoffs to contend for the State Tile win.

A slow start at #2 seed of junior, Ashlyn Rough Southern MissBVB commit and senior Hannah Doyle TAMCC beach commit was not going to stop their winning streak to win first set 21-18. The pair immediately bounced back to show their team chemistry and adjusting their game play to win 21-11 and gave OC 4-0 lead. Doyle has been a great leader on the team to help players to communicate and lead by example. Rough/Doyle is a big force for State contention and will be another key role for State title bound opportunity.

Final pair of the night was our #1 seed, Sydnee Broadway and Margo Smith continues to show great chemistry. Their first set win 21-16 was a slow start as they had some unforced errors but their veteran beach game came to surface as they dominated second set 21-14 win. The pair will qualify fo the State Pairs championship matches on May 20th who will be one of the top pairs in the state.

In the exhibition match, junior Annika Weber and Freshmen Kale Welborn dominated their two set win 21-4, 21-12. The future is very bright for these two athletes. Welborn’s beach knowledge and game strategy is evident and able to showcase her skills in every match. Weber continues to show growth in her game and has been a very positive teammate that contributes to the team chemistry.

Senior Day gives the #3 Ranked OC Beach team win it’s final home match earning their 10th sweep of the season and giving OC Beach 10-1 record. As we end the night, the seniors have impacted this program to their fellow teammates, coaches, family and friends. The results of the successful seasons in the last few years has built the journey from this group of seniors.